Is There Hope in Desperate Times?

Inmate to Enlightenment: A Story by Our Owner

Hello Luna family, this is Courtney “Ketu” Thomas, co-owner and Executive Director of our company. In light of Black History Month, I wanted to be transparent with our community and tell a story about some of my struggles as a young black boy raised in southside Chicago and how I’ve created a new paradigm for myself, my family and my community. 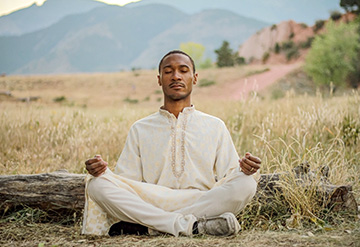 The well known cliche, “product of your environment” quickly became my living reality. Chicago is infested with violence, drugs, poverty, and crime! Growing up in such an environment, structures where your beliefs have their basis; the knowledge you receive, future visions, current events, and past results. By the tender age of 7, I had been in so many fights at school that I was on the verge of being expelled. That’s when my mother decided to send me to an all-boys military academy in the surrounding suburbs, a place where I spent my weeks for the next 8 years, only coming home on weekends and summer vacations. While I did have some good experiences there, it was the beginning of being in an institutionalized environment!

Let’s fast forward to my 21st birthday where I was convicted of my first felony offense for drugs and spent the next 2 years in the Illinois Department of Corrections. While serving time in prison, I was convicted of a second crime for violence. Struggling to fit back into society after my release, 4 years later I found myself being convicted of yet another crime. It was then that I began to change my perspective on life and began a spiritual quest, restlessly seeking something to create a new paradigm!

It started with me diving deep into the Bible while serving time during the last conviction. It was John 14:12 that gave me hope and direction. Jesus stated, “Very truly I tell you, whoever believes in me will do the works I have been doing, and they will do even greater things than these, because I am going to the father.” Now I can’t say I believed this to be true at the time, I mean, who am I? Just another black man sitting in a prison cell! But I prayed… SINCERELY! “Jesus I can’t say that I believe you, but that faith of a mustard seed spoken about, I do have that! If you are truly who I perceive you to be, then lead me, and there I know where I wouldn’t follow!”

After about two years of spiritual milk (Bible verses and church) I was led away from religion and shown that the Kingdom of Heaven is truly within. So, purification of the Temple (Mind & Body) is a necessity in the development of consciousness. And that’s when I found Vedic Science. Like most people, it started with Yoga Asanas (postures). Things really ramped up when I found Ayurveda and meditation. I used to watch Oprah Winfrey often. I remember Oprah Winfrey holding 21-day meditations with Deepak Chopra, someone I was completely unfamiliar with at the time. The meditation series that really caught my attention was Perfect Health. It took two years for me to finally be able to attend the detoxification retreat at the Chopra Center in Carlsbad, but that was the game changer! Suddenly life was in flow, and I felt a sense of balance and wholeness!

I spent the next 2 years implementing in Ayurvedic principles and other technologies of consciousness in Vedic Science, which during this time I created that new paradigm for myself. I decided since this worked so well in my life, that I wanted to share this beautiful knowledge with the world. It was then that I enrolled into Maharishi International University for my BA in Ayurveda in Integrative Wellness. It was Maharishi Mahesh Yogi that taught Deepak what he knew, so I wanted to go directly to the source. I also began the practice of Transcendental Meditation at the time, and life became even more effortless, but with much more efficiency. I spent one year in Iowa immersed in the community of Maharishi followers before I felt adequate to bring this knowledge to our community, so I enrolled to finish my curriculum online and came back home to open a wellness center.

Months later I found Luna Float Spa and to my surprise, they were looking to sell the business. It had been open for 4 years prior to our purchase and struggled to show a profit year over year. This made it challenging for us to get financing as no lender wanted to provide the loan amount. Having my own subjective experiences with Maharishi’s technologies of consciousness, I felt confident that as long as we implemented some of them (most in the realms of astrology) that we could make it a success. I convinced my wife that we should sell our home and go after our dreams! And then COVID happened one month before the day we were supposed to close on the deal. Honestly, it felt like a test, one to be of most confidence in my beliefs no matter the outside circumstances. Regardless of the huge risk and fear of taking on a business in the midst of mandatory closures, we did it! We both couldn’t be happier with the results. We had our own wellness center in the prominent Broadmoor area!

With use of the technologies of consciousness, we quadrupled revenues within the first 4 months, even in the height of the pandemic. By month 7 we expanded into additional space sin Country Club Corners where we began planning the upcoming Salt Cave venture. After 18 months in business, we now have a center for meditation to host groups to learn and practice their Transcendental Meditation with us. As the visionary I have so much more I wish to bring to our community so that everyone will know, no matter what circumstance you may be currently in, you are able to create the life you wish to see!

Keep a look out for later this year, where I will begin offering Consciousness consultations to our community, deepening your understanding of Consciousness and how it applies to practical life. After administering a Consciousness assessment, I will make recommendations for clients for techniques, tools, and processes that can be applied in your own life on the path to expanding your experience of Consciousness! Programs to create balanced health and diet, to build homes and buildings that support greater success, to identify the patterns and trends in life to avoid problems before they arise, and more. All technologies of Consciousness that I’ve adapted into my own experience, which were significant in creating a new paradigm for myself and all those within my surroundings. I look forward to assisting you all on your personal journeys to Enlightenment!

Thanks for reading my story as I honor black history month. We appreciate everyone’s support throughout this time and helping us in our success. We’re just warming up, so look forward to bright and lasting future!
Courtney Thomas
Namaste